The Real Reasons Why You Buy

(from Carl Richard’s New York Times’ Bucks blog, 4/16/2012 – click here for the original post. Carl is a Certified Financial Planner in Park City, Utah. His sketches are archived on the Bucks blog and on his personal Web site, www.BehaviorGap.com.) His new book The Behavior Gap is on shelves now. 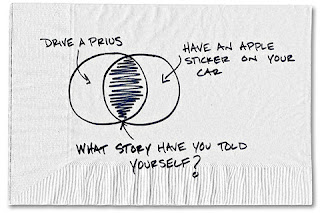 Before we buy something we tell ourselves stories.

We are particularly fond of the story that goes like this: We have researched all the options, and the decision we have made represents that best one we could make given the facts. Just the cold, hard facts.

And we make up other stories as well, many of which have absolutely nothing to do with the actual facts. We create these stories to help ourselves feel good about a decision we have already made.

For instance, many times we actually reverse the process. We decide what we want, often for emotional reasons, and then we go looking for evidence to support the decision. As we are gather the evidence, we carefully omit anything that doesn’t fit into the story we’re writing.

This is so easy to do you could say that it’s natural to us. We don’t really have the time to consider every single option. If you did, you would never get past your closet in the morning. So we take shortcuts. We decide what we want and then gather a few facts to prove to ourselves, our spouse and our family or friends that we did the right thing.

When it comes to spending money, one of the stories we like to tell ourselves is that we aren’t just spending. This item is actually an investment. It’s an investment in ourselves and our quality of life, or an investment that will actually save us money over the long run.

So we run the numbers, or more likely we read about someone who ran the numbers. Then if the narrative matches, we use that as evidence that we’re doing the right thing.

It seems easy. A simple case of addition or subtraction.

Things get complicated pretty quickly, however, when we start using the argument of saving money as a Trojan horse to hide the real reasons we’re doing something. Let’s take the case of whether to buy a hybrid or electric car.

If you decided that you want a hybrid, it’s pretty easy to find evidence to support that decision, but be careful if you’re telling yourself that it will save you money.

Except for two hybrids, the Prius and Lincoln MKZ, and the diesel-powered Volkswagen Jetta TDI, the added cost of the fuel-efficient technologies is so high that it would take the average driver many years — in some cases more than a decade — to save money over comparable new models with conventional internal-combustion engines … Gas would have to approach $8 a gallon before many of the cars could be expected to pay off in the six years an average person owns a car.

To be clear, there are plenty of legitimate reasons to buy a more fuel-efficient car. Unfortunately for the buyers relying on the numbers argument, one of them isn’t saving money in the short term unless you buy specific models.

So why do we hide behind saving money?

It’s easy to point to the price of gas. It’s harder to explain why the environment benefits from one more person driving an electric car. And it’s harder still to explain why driving a hybrid just makes you feel good.

And few people want to admit to adult peer pressure. How could you live with the story that you actually bought that Prius because you wanted a cool spot to put your Apple sticker?

Obviously cars aren’t the only thing we try to make the saving-money logic stick to. How about the recent argument at Slate that you should run out and “buy, buy, buy” a house if you are currently renting? This is a classic case of using tons of “evidence” to tell a nice little story while ignoring the data that might not fit nicely in the narrative.

Based on the facts presented in this particular story, it looks like it might actually be cheaper to buy than rent, but it states that any consideration of where prices might be headed is “irrelevant.” It’s just one more example of how far we can go in our storytelling exercises.

And it’s not that simple, as you’ve probably guessed. What if prices fall 10 percent and you have to relocate for another job? What if you know you’re moving in three years and prices stay the same?

You may be very hard pressed to break even after you consider the costs associated with buying and selling the house (e.g., real estate commissions, closing costs, moving costs and taxes). With a little honesty, there goes that nice, clean “time to buy” story.

While cars and houses might require the most complex stories, we often tell ourselves little ones about things like vacation “deals,” using a rewards credit card and buying in bulk. Often they get brushed with the halo of saving money. In each instance, saving money may be one of the reasons you’re doing something, but you can rarely say that it’s the only reason.

And that’s the point.

We tell ourselves stories about why we’re buying something, and saving money is a good story.

But I think one of the best conversations you can have with yourself, your spouse or your family is about the real reasons behind why you spend money. Be honest, even if it means having to admit that you’re buying something only because you simply want it. Blurring our reasons for our decisions around spending money is a slippery slope that can lead to a lot of financial headaches.