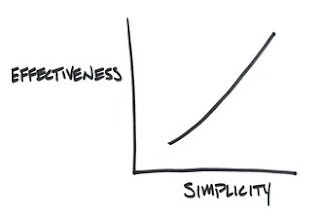 Why do we say we want simplicity and then chose complexity? It often starts when we get caught in the trap of two competing stories. In the first one, we tell ourselves we want to simplify, simplify, simplify. In the second story, we tell ourselves that the solution to an important problem has to be complex. The reality is that getting something simplified is the ultimate form of sophistication, so why don’t we choose simplicity when it comes to financial planning? Even though people list simplicity as their number goal on survey after survey, we still seem to opt for the more complex solution because complexity can appear easier on the surface.

Too many times, I’ve seen people disappointed when I’ve proposed a simple solution to their investment or financial planning problems. Often the solution can be reduced to a simple calculation on the back of a napkin, but clients somehow take comfort from a 100-page paperweight packed with a thousand calculations. Logically they know that complexity isn’t a guarantee, but it seems to make people happy.

Pleasure in complexity even shows up in emergency rooms, too. According to a physician friend, patients are often disappointed when the diagnosis is relatively simple like, “Go home and get some rest,” or “Stop smoking and eat a little less junk food.” The patients appear to hope for a terminal disease because it’s “easier” than going home and following simple, but hard, health rules.

We spend $40 billion a year on weight-loss programs and products even though we know that for most of us the answer is simple, but difficult. It comes down to either consuming fewer calories, burning more calories with exercise, or both. But it’s tempting and far more interesting to look for complex solutions that appear easier, but aren’t effective.

What part of human nature attracts us to complexity instead of a simple solution? Maybe we’re counting on a magic bullet, something to save us from the simple, but often hard work. Maybe debating complexity is more fun than the day after day grind of just getting the work done. We even have a tendency to believe that complexity is a sign of intelligence. In reality, the simplest solution almost always turns out to be the most effective, but also the most difficult.

One example in a recent Reuters article highlighted a family that put their kids through college with no debt. They managed it on a modest family income by driving the same car for 10 years and putting money away month after month. The author asks, “Is this a fairytale?” If it is, then we’ve forgotten the basic tenants of financial success. Based on my experience boring, simple things like saving money, avoiding speculative investments, and repeating that process over and over isn’t sexy or appealing.

We need to understand our attraction to complexity because it impacts the way we approach our financial goals. The reality is that the simple options with the largest impact on your financial success can be difficult to implement. They require discipline, patience, and hard work. And they require that we apply those basic, fundamentals over and over for years. It’s much easier to entertain ourselves with the thought of finding an investment that will give us a fantastic return than to save a little bit more money each month.