Don’t Confuse the Urgent with the Important

Carl does a great job in the blog below of reminding us of why those things with low urgency, but a high degree of importance on our to-do list deserve our time and attention before it’s too late.

(from Carl Richard’s New York Times’ Bucks blog, 3/21/2011 – click here for the original post.  Carl  is a certified financial planner in Park City, Utah. His sketches are archived on the Bucks blog and on his personal Web site, BehaviorGap.com.) 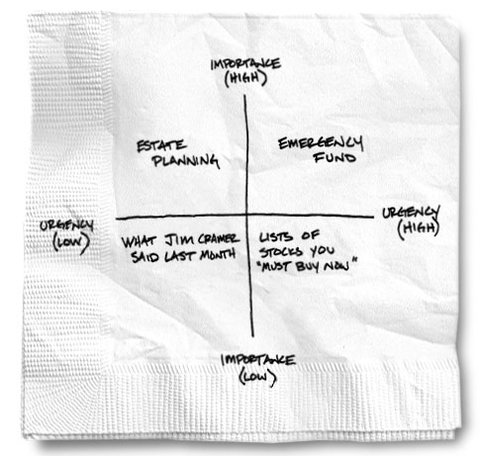 Last weekend marked the beginning of spring, and even though there’s still snow on the ground here in Park City, it reminded me that nearly a quarter of the year has come and gone.

Like many of you, I made resolutions in January. There were a lot of important things I wanted to accomplish. And for a few weeks, I did really well. But now it’s March, and part of me is panicked. There’s still so much to be done. But another part of me latched on to the second half of the equation: I still have three quarters of the year to go. What’s the big deal?

The problem results from the distractions that come from things that seem urgent. They cause us to lose our focus on the important issues.

On a day-to-day basis it’s easier to focus on those urgent things that capture your attention. After all, who wouldn’t focus on getting the car fixed over making sure the will is up to date? That seems like a logical decision that trumps the merely important goals you set in January.

Bob Goldman, a financial planner, said that he sees a surge in business around January and February. So at least they’re trying.

But Mr. Goldman added that he often doesn’t see those people again for years. Following through on the big decisions tends to  drop down the list quickly when you’re confronted by life’s urgent demands. After all, many of these important goals appear complex, like buying life insurance or setting up college savings accounts. So we often push them aside in favor of the urgent and immediate.

Plus, we enjoy the sense of checking urgent things off a list. The more urgent the task the greater the sense of satisfaction. By comparison, sitting down and working through the details of your personal and financial lives doesn’t offer the same sense of excitement and immediate gratification.

Here’s the danger in all of this though. Once time passes, the important eventually becomes urgent. But by then it may be too late to do much about it.

Think about the stories of friends and colleagues who are dealing with complicated estates because family members let the urgent trump the important. Then there are the parents who didn’t think 18 years would pass so quickly; now they’re unsure whether they can help pay for college.

A friend who is an estate planning attorney noted that people will often come to him in a panic right before taking a trip without their kids. With worst-case scenarios floating through their minds, these couples want their wills done in case the plane goes down or the ship sinks. Since these things take time, it’s often impossible to finish before they leave town. Then, my friend doesn’t hear back from them again until a few days before the next trip.

If there’s one resolution that I hope each of you keeps it’s this: please set aside time each month to tackle these important questions. Yes, you will be tempted to brush them aside until next month because there will be something urgent going on. But you can’t keep making the same resolution every January to deal with your important decisions this year. The tasks will never get smaller if you don’t start dealing with them one by one.
After every financial crisis we often ask, “How did we miss the signs?” Unlike a large-scale crisis that only seems obvious in hindsight, you know that you can prevent a personal financial crisis by tackling the important tasks in your life right now.